To all those who seek truth and genuine justice in this world and despise censorship, the below was my letter sent to Mr. Harper via the OSC. The night that I composed this letter I had been drinking some wine and this is part of the reason I mispelled his first name. The other reason is because one of my former lawyers had made reference to Mr. Harper as "Dennis The Menace" and for some reason that bit of humor stuck in my mind. At that point in my life I had no feelings about Harper one way or another since I did not know much about the man at the time.

Had I not been drinking this night I might not have been angry enough to get motivated to write this communication. I then was given some coffee by my wife which I promptly spilled on the letter. I then printed out a second letter and third letter and kept the soiled one as my copy.  One of the other letters was identical to this one (addressed to Harper) and the other had sentence difference which was addressed to Mr. Wilson the Director of the OSC at the time. These letter will not mean much unless you know the background of where I worked from 1994 to 1996 and how and why I became a government informant after resigning from American Financial Group and WHY. 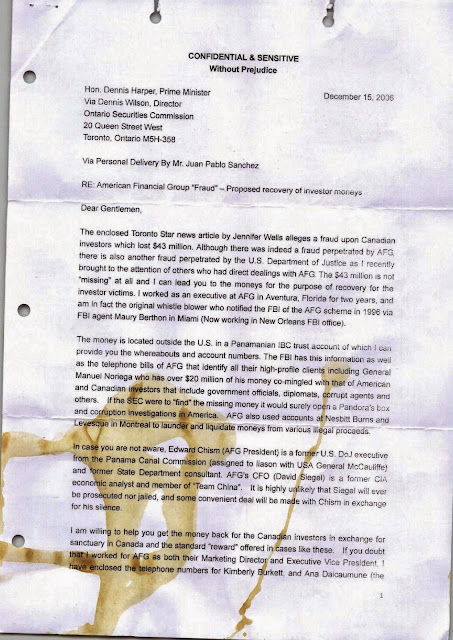 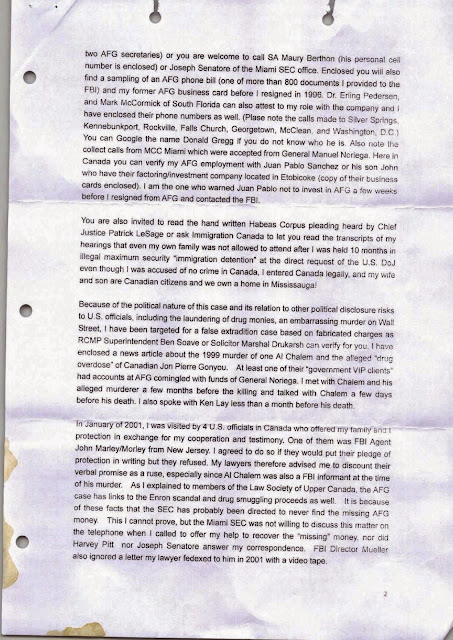 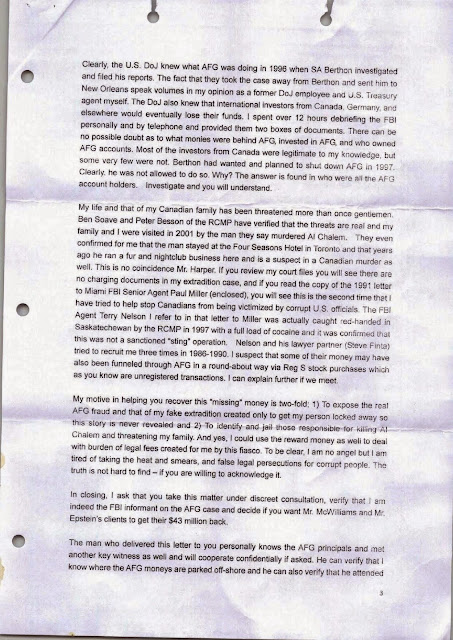 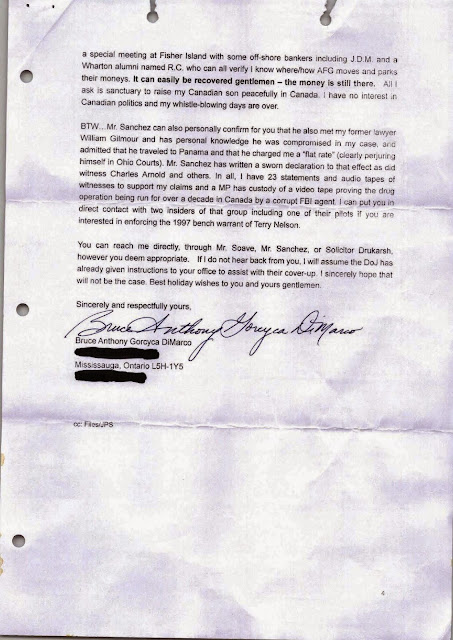 Please make no judgments nor assumptions about this letter until you read the 19 sworn statements of other witnesses and have a chance to listen to 2 dozen audio and video tapes, and other documents I have no way to get to you electronically without compromise. As Elias and my friends can tell you my communications have been blocked. Even though MP Alghabra told me I could legally come back to Canada after 6 months of departing in 2008, the U.S. government did something that made that impossible. I have been forced to live in exile here in China where I cannot testify against anyone. I am willing to testify under oath by video and take a polygraph exam administered by a non-govt. entity. My concern is for the safety of my family as my wife and I were both threatened many times and had our home and family car shot up in 2008 (The Peel Police responded and my wife gave them recordings of the nasty threats left on our family answering machine. Below is what they did to my wife's kitchen window. My wife was 3 months pregnant at the time and the shots came through the window about 18 inches away from where my son plays on his computer. 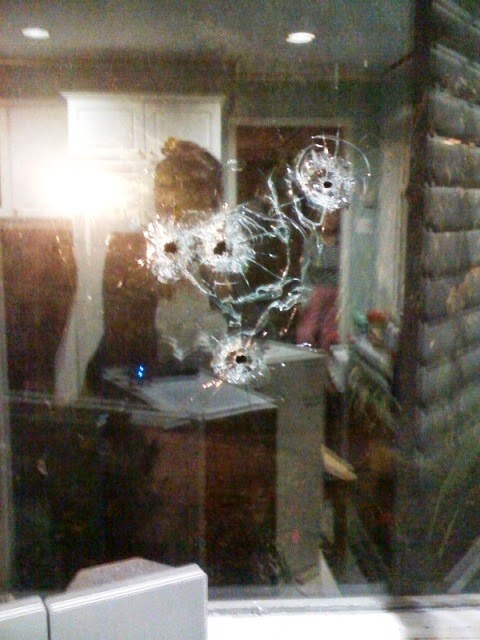 To better understand why people threatened to kill my wife and I and why they actually did kill two of my associates (one murder was obvious - Al Chalem, and the other was not so obvious - Canadian John Pierre Gonyou) you will have to read this here which I published in 2013 after someone took a shot at me here in Beijing and missed hitting my Chinese translator by about 4 inches. (We took photos and I obtained a statement from the translator) Read this: https://americanfinancialgroupfraud.wordpress.com/

No I am not crazy, and two top ranking agents have admitted I have been 100% truthful about what I told them and they already knew about half of the story. The largest smuggling operation in the world was operated by two corrupt agents and I can introduce you to people who worked inside that operation for almost 10 years. I was recruited to work for their operations - to fly for them and to set up an airstrip in Puerto Rico. I declined but some of my friends did not. AFG laundered the money for this operation and I tried very hard to help the Canadian investors get back their $43 million.  I gave Paul a 3 minute video tape after which time he knew my extradition was a fraud. He offered to help me and even mentioned the matter to Marten Cauchon. But my former lawyer who himself was arrested on August 14, 2001 was paid off to sabotage my case and he refused two invitations from Paul to meet with him. We can prove he was paid off by the way.

Go back through all the files I gave to Elias & MP Omar Alghabra and look for the Sworn PI Report and you will see I was extradited ILLEGALLY from Canada without any charging documents presented at my hearing and I was disallowed 3 three requests to speak to the court, and 5 of my witnesses were not called to testify. The entire affair was a sham. When I was taken back to the U.S. after 8 years of fighting the extradition, I represented myself and the oldest Judge in New York (Jack Weinstein) dismissed my charges on Dec. 17th, 2007. Because others are reading this I cannot say more. But there is MUCH more. I was visited here in China by high-ranking officials. 2 claimed they wanted to help me and one said my wife and kids would be killed if I ever tried to return to Canada or the U.S.

I was also advised against contacting any MPs or Senators and was advised all their communications were monitored by the spooks South of the border and nothing I send would reach their hands.  An incident happened shortly thereafter that proved they were/are right.  I tried twice to fax some documents to Elias and send him two packages that were intercepted. My emails to him were stripped of attachments and some did not go through at all.

For those of you who think I am a criminal, I am the following...

I have not seen my wife and kids in 4 years. Send E or O to come see me and I will give them everything and introduction to 5 other living witnesses including two honest cops at very high levels.